Having celebrated its twentieth anniversary in 2021, Koha (from the Māori word meaning gift) remains a robust and free open-source library system. Libraries of all types from around the world have adopted it as their ILS. Unlike proprietary software which acquires value from the reputation of the company that designs and sells it, the value of an open-source software solution is determined by the community that uses, supports, and develops the software. In the case of Koha, creativity, innovation, and dedication permeate its exceptional global community. The result is a stable, flexible, and scalable ILS that is accessible to libraries of all shapes and sizes, from the library at Malaysian Baptist Theological Seminary to the library of The British Museum. Koha’s success is due entirely to the people who are involved in the project, from developers who work on the code to librarians who report bugs and suggest new features.

There are several modules within Koha that a library may choose to utilize. These include circulation, patron account management, cataloging, authority control, serials management, acquisitions, course reserves, and interlibrary loan. The reports module utilizes SQL and offers a report writing wizard as well as unlimited custom report writing options. Tools are available to support a wide range of library functions, like printing library cards, barcode labels, and call number labels, as well as performing inventory on a collection. Batch processes are also well supported for patron records, bibliographic records, and item records. A plugin system adds more versatility and interoperability in a way that is easily accessible to systems librarians. Examples of plugins include a carousel for book covers to display on the OPAC, send a custom notice from a report, and recall items currently checked out to patrons. Koha’s REST API is another tool available to librarians who are looking to integrate and connect multiple library software solutions.

From a cataloger’s perspective, Koha is friendly enough for those new to bibliographic metadata and sophisticated enough for the most seasoned catalog librarian. MARC record viewing and editing defaults to a tabbed interface with labels for every field and subfield.

In editing mode, a hyperlinked question mark next to every field takes you to the MARC 21 information page for that field.

Catalogers who are more accustomed to a text-based editor will appreciate Koha’s advanced cataloging editor, which supports macros, keyboard shortcuts, and a clipboard.

Librarians are also able to create and manage multiple bibliographic frameworks, which can help tremendously with original cataloging. Z39.50/SRU server administration is built-in, and once configured facilitates a smooth copy cataloging workflow. Bibliographic records can also be exported and imported in batches.

A relatively new feature to Koha is the ability to switch search engine technology from Zebra to Elasticsearch. While Zebra was written especially for library systems, the way in which it stores information for search and retrieval is slow compared to current computing standards. A few years ago, Koha developers adopted Elasticsearch to become the new search engine for Koha and began incorporating it into the code. Libraries that set their Koha search engine to Elasticsearch can now customize mappings from MARC fields and subfields to search indexes and facets, and manage weights assigned to search fields to produce more relevant rankings in search results. 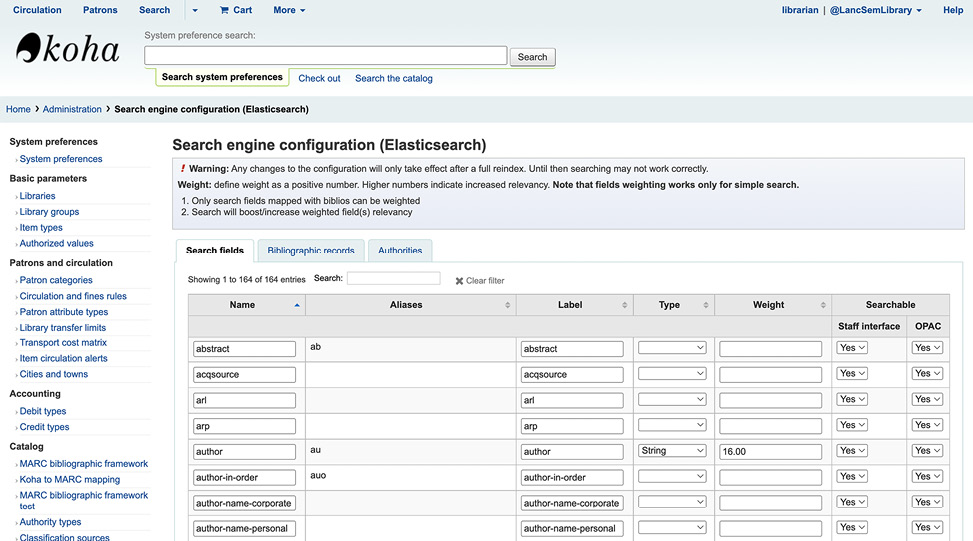 Librarians who choose to migrate their libraries to Koha, and those who might find Koha thrust upon them, will find a welcoming and open community of users and developers. There are multiple ways to get involved and contribute to the project. The global Koha community maintains an email listserv and Bugzilla, a website for reporting bugs, commenting on them, and testing patches (https://bugs.koha-community.org/). Koha libraries in the United States have formed an active user group that offers annual conferences, monthly interest group meetings, and more (https://koha-us.org/). Anyone looking for a highly customizable ILS with an excellent support and development community would do well to try Koha.